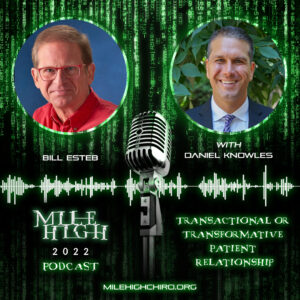 Will Rogers is known for saying, “It isn’t what we don’t know that gives us trouble, it’s what we know that ain’t so!” This quote is one of Bill Esteb’s favorites.  The special guest on this episode of The Mile High Podcast is the founder of Patient Media and Perfect Patients.  He’s created some of the Chiropractic profession’s legendary media material, approaching patient education with a beginner’s mind, to grow better long-term practice members.

Bill enjoyed a wonderful childhood growing up in Olympia, Washington. A college communication class landed him an internship at a local radio station, and he found a mentor in the station newsman, who taught him about how to ask questions, conduct interviews with newsmakers, and how to write for clarity. Because of him, Bill found radio so stimulating he dropped out of college to work full time at the station.  Later, he worked at advertising jobs at two Colorado agencies and then in film production.

Soon after, he was introduced to chiropractic.  As part of his job duties, he flew to Spokane, Washington for a three-day chiropractic seminar co-taught by two incredible speakers and chiropractic visionaries. What he heard “connected the dots” and he fell in love with the principles of chiropractic.

He began his own chiropractic care about a month later, mostly as a research project. Non-symptomatic, he could tell after a month or two that his health had improved. He went on to write the Peter Graves, Russell Erhardt and Jayne Kennedy Chiropractic videos for Renaissance

In 1987 he met Dr. Michael Parrish, a Colorado Springs chiropractor who owned seven, associate-run chiropractic practices.  Soon after, he and Dr. Parrish joined with another chiropractor and launched Back Talk Systems. That’s when the Report of Findings Magazette was invented.

One of the highlights of his career was addressing the February 1995 centennial graduating class at Palmer College.

In April 1999 he sold his half of the old company and started Patient Media.
Most recently he’s become interested in how to best use the Internet to spread the Chiropractic message. That has resulted in a collaboration with his Perfect Patients digital marketing business partner, Steve Anson, in Perth, Australia.

On this podcast you’ll discover:

Looking forward to seeing you at Mile High in June of 2022.  Get your tickets today at MileHighChiroRegistration.com

P.S. Join Mile High All Access and enjoy Mile High wherever you are on our app. Download it now!

[Podcast] Avoiding Burnout and Optimizing Your Impact with Danielle Eaton